Being a woman of the 21st century, I am perpetually looking for ways to be better to my environment. This want is always in direct competition with the want to save money. The epic battle reached a ceasefire when I found a sale on silicon cupcake cups at my local grocery store. I was so giddy with excitement that I ran home and made chocolate cupcakes.

I used both silicon cups and traditional paper cups. It wasn’t until I was removing the first batch of cupcakes from the cupcake tin that I noticed any marked difference between the two. The first thing I noticed was that the silicon cups were much easier to get out of the tin than the paper cups, you can just pull it out by the cup without touching any of the hot surroundings. The second thing I noticed was that the paper cups did not inhibit the buttery batter from seeping through and dirtying the cupcake tin, whereas the silicon cups were able to prevent this, keeping the tin clean. Which is the whole reason why I use cupcake cups in the first place.

I did notice that the cupcakes pulled away from the sides of the silicon cups in an odd fashion while baking and the peaks sort of folded in on themselves while cooling. Despite these downfalls, they were quite easy to ice, and were especially easy to handle while icing. 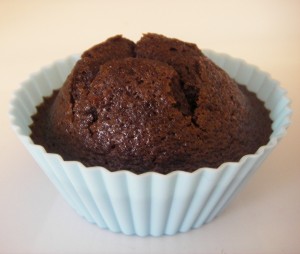 Cupcake in silicon cup, without icing

It was a little tricky to get the cupcakes out of the silicon cups the first time. Usually you just peel the paper off but with these cups you had to invert the cup and pop the cupcake out. I did find, however, that the extra work was worth it when I saw how cleanly the cupcakes came out of the cups. There was very little cupcake stuck to the cups and they were much less crumbly when eating. They held their shape quite well when out of the cups, so well in fact that they could be removed for severing if you prefer. The trade off for these benefits is that the cupcakes do have a hard edge to them around the top of the cups. 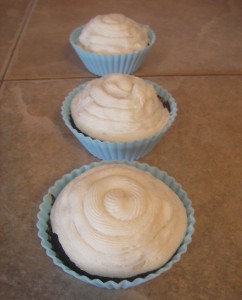 The silicon cupcake cups were a bit awkward to handle while cleaning but they did come clean very easily. One thing that did upset me slightly was how the chocolate cupcakes stained my light blue silicon cupcake cups. No matter how much I scrubbed, they did not return to their pretty former selves, but who looks at the inside of a cupcake cup anyway.

Overall, I would strongly recommend the use of silicon cupcake cups. I have not yet taken the initiative to look into the environmental impact of producing the silicon cups versus the paper cups but washing a reusing is probably better for the planet than composting and re-buying.