The holidays have come and gone once more, but for me this year was unique, it was my first Christmas away from home. Even when I was studying abroad (when you grow up in a town where you’re never more than a few kilometers away from a cornfield, a 3 hour drive is considered abroad) I still came home for the holidays and, more importantly, had financial support from my parents.

This year I’m paying rent, car insurance, gas for the car (which I would list twice for comedic effect if gas prices hadn’t stopped being funny so, so long ago), expenses, and “expenses” (booze money). This Christmas I learned about something firsthand, I like to call that something, The Christmas Debt. The Christmas Debt may apply to other cultural holidays as well, but I celebrated Christmas this year so I’m sticking to what I know. I considered celebrating Hanukah so I wouldn’t have to help anybody put up Christmas trees (I’m tall, so they always ask) but I couldn’t find a menorah, seriously where do you even get a menorah? 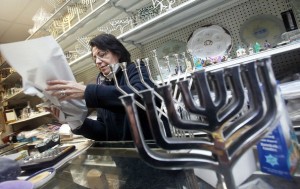 Is there a Jewish surplus store I don’t know about?

This article may seem untimely as Christmas is 2 months past, but I’m still working on paying off the debt I generated so I’d say now is as good a time as any, not to mention that one guy on my street who has yet to take down his Christmas decorations.

I spent very conservatively this year, bargaining on gifts for some friends and relatives, and denying affiliation with others until after the holidays. Nonetheless I spent more money than I had, which wasn’t hard because any amount is higher than zero. And I mean ZERO; I was recently told that I officially live below the poverty line.

In this day someone my age can’t be too surprised to find out they’re considered poor, I know I don’t have money, all that being granted the official status changed was that I can now get away with wearing a plaid shirt everyday. 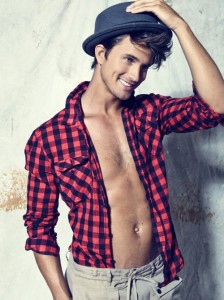 I did a fair amount of my Christmas shopping online this year. I was able to find some great deals but I put them all on my credit card, which I kept track of. What I didn’t keep track of, however, were all the times I put gas on my credit card, and I did quite a bit of driving this December. My long distance girlfriend’s religious family set some very inconvenient dates and insisted I be there, so I was back and forth quite a bit. They were real sticklers for punctuality, where, I, last week, was late for work twice in one day.

At the end of the month I anticipated my visa bill to be between six and eight hundred dollars, I was surprised to find it was a little more than twelve hundred dollars. When I lived at home, discovering a four hundred dollar debt was like a tap on the shoulder, maybe I shouldn’t go to the bar this week, or maybe I should cancel my trip to the water park (I sure miss home life) but now that I live alone, four hundred dollars is a straight gut-punch. I live on a budget now and when I don’t stick to that budget it requires me to pull money out of nowhere to cover it. It means picking up extra hours at work and wearing socks with holes in them until that debt goes away. But it’s not all so bleak, we all have to pull ourselves up by the bootstraps once in a while, I still have a roof over my head and four wheels on my car so I could definitely be worse off. 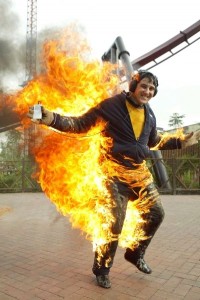 I could be on fire, for example.

The lowest point in the last two months, at least financially speaking (because losing your girlfriend to the advances of a Navy Seal is in a whole different category), would be when I defaulted on a payment to my car insurance company. I have what’s called “High Risk Insurance”, the company I deal with is the only one that offers it in my Province, and they in no way hesitate to abuse my lack of options. When I defaulted on a payment I received a letter, three weeks after there was anything I could do about it, stating that next month I would be charged double. When my next payment came due (one week from when I got the letter), I pulled some strings and managed my finances well enough that, four days later, I was able to just barely meet my surprise double payment. That’s when I received another letter saying that they would be adding a $50 late fee to my next payment (due three days from when I received the letter). I had to borrow money from my father but I was able to meet the payment.

By the way, a $50 late fee, that’s 17% interest , and I assure you, as jubilantly as my insurance broker laughed when I handed him the cheque, I assure you: that is not a joke. Although phrased correctly it totally made the cute girl who helps me with my banking laugh, which is good because she’s seen my account balances, she knows exactly what I have to offer.

The insurance thing was rough, not as rough as the Navy Seal thing, but still rough. Someday I hope to deal with a broker who returns my calls, with whom I’ll never be required to use the phrase “…slap your lying face…” but I digress, the payment was cleared, and now I only owe money to my Father, a man who has never once threatened to revoke any variety of insurance from me.

Furthermore, my teeth hurt, I have at least three cavities but I’ve been avoiding going to the dentist as I couldn’t afford it, though soon I wont be able to afford not to go, so I’ve scheduled an appointment for next month, again, my father has agreed to lend me money.

However things are starting to look up, I’ve been careful with my money the last 2 months and I am working my way out of debt, well enough even to leave my credit rating untarnished. I had a good talk with my banker the other day, I was just there to deposit a cheque, but she’s ADORABLE, and I am never reluctant to start a conversation with her. 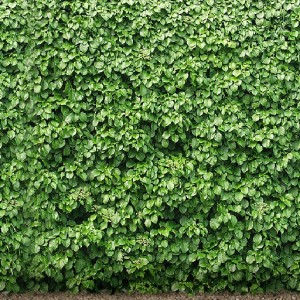 I tried to include a picture but it was skewed by the bushes.

We were both surprised to find that I have an excellent credit rating, together we added an overdraft to my account, and I was issued a second credit card with which I will collect rewards for using at select gas stations. Yes these will enable me to sink further into debt, but I’ve managed to keep my head above water long enough that I’m confident I can use them responsibly, I admit that there are people who can’t handle imaginary money, but I assure you I use my credit responsibly.  I’m the only person I know who pays my visa bill before its due, I once got a bill saying Visa owed me fourteen dollars because I accidental paid too much that month. It’s just this Christmas that caused me so much financial trouble.

The spirit of Christmas just does something to people, it makes my dad a year older (born Dec 24), it makes my mom yell at me (very “passionate” about the holidays), and it makes me buy things (see above).

This story actually has a happy ending, I talked about over-spending being remedied only by conjuring money from nowhere, I intentionally phrased it as sounding difficult, even impossible, however nearing this article’s completion I received a cheque in the mail for 422 dollars and I have no idea why. The envelope included a lengthy letter that explained nothing; in fact it only confused me further. What ever the case I lucked out, I’ll be able to settle my Christmas debt sooner than I expected, and I will be sure to spend more wisely next year. In other words, I’m going to go Jewish and give out home made presents next year…it’s not fascist, Hanukah presents are traditionally home made, it originated during the 40 year wanderings in the dessert when all people had to give was what they already had. Additionally I will be saving money on gas as I am no longer in a long distance relationship (Navy Seal), that’s what we call a silver lining.

I learned a lot about money this past year, it’s one of the few things in this world that you can learn the most about by an absence there of, and I hope today you’ve learned a little something about being cautious with your cash. Hey, even if you’re rich, you got to learn a fact about Jewish tradition and that you should never trust a Navy Seal.