This New Year’s I made a few resolutions, including but not limited to:

I’m researching getting a security license so I can gain some experience that will help me in a policing career. I confronted my girlfriend about her infidelity, ultimately ending my relationship, which I feel was a move in the right direction. Now I’ve got my hands on a copy of P90X, so everything’s falling into place. Except for that three-way thing, but that was just a joke… unless you’re into that.

I went to Zellers and got a chin-up bar for 40 dollars, the final piece of equipment I needed for the program. I will be starting P90X on Monday, along with my roommate Dylan and our friend Brandon, when he has time. Incidentally when I got home I found that the only doorway that I could properly affix my chin up bar to is the bathroom door, which is on the complete opposite side of my apartment from my living room/ “home gym”, but we’ll make it work.

We didn’t know quite what to expect when we started the program. It started with walking on the spot and we felt/looked silly, in fact, we closed our curtains because our neighbour, “Muscles” (he lifts weights in front of his window) has really big muscles and we didn’t want him to see us looking silly or he would never invite us to the meetings of the super secret buff guy club he says doesn’t exist. The feeling of silliness passed once we got into the actual workout, it was replaced by a lot of other feelings, in a word, exhaustion. It’s a pretty intense workout but the reason I started it was because I wasn’t getting results with my old routine anymore, so I’m optimistic about it. The chin up bar was actually used some today, but the program is fairly go-at-your-own-pace so we were easily able to pause the video and relocate to the bathroom when we needed the chin up bar.

So I’m in, its day 2, I am officially participating in P90X and I feel more muscular already. In fact, before work today, I nonchalantly cornered “Muscles” at the bus stop and showed him the gun show. There’s no way he can exclude me from Buff Guy Club now, but I digress, on to the workout.  I’m not certain what plyometrics means and I was surprised that we didn’t lift a single weight today, regardless it was still a tough workout.

Update: plyometrics is code for leaping around your apartment for 60 minutes.

I’ve made two changes to my workout equipment, I have added a bandana, because after yesterday’s leaping around I realized how much getting my hair out of my eyes would benefit me, and I have switched from a t-shirt to a tank top, because the body heats up quickly when you’re rippin’ it. That’s what us buff guys call working out, “rippin’ it”. Also our friend Brandon from down the street has asked to join us in rippin’ it today. Today wasn’t too different from Monday (day 1). It was another upper body workout, this time using different muscles with similar exercises, the main difference being a greater use of free weights at a higher intensity. We ate steaks after our workout today because the host of P90X says protein is essential for building muscle.

Yoga is very zen, it’s spiritual and relaxing and peaceful. Putting an X behind it changes everything, before today I could not see my self using “yoga” in the same sentence with words like “intense” or “hardcore” or “things I did today”. I was a touch apprehensive but I got a great work out and I enjoyed it. It was a lot harder and less “hippy” than I expected it to be. I’m glad that my first time was in my apartment, as opposed to a studio crowded with flexible and, furthermore, judgmental housewives. All I had to put up with was Dylan’s catty remarks.

I actually had the day off work today so this is the first time I’ll be able to do my workout while the sun is up, which I prefer to “night rippin’”, as they (or probably just I) refer to it. Before I started P90X, I was running between 3 to 5 kilometres daily, so my legs got worked and I didn’t think much else about it, in fact, I didn’t really know any stationary leg workouts, so this was all new to me. Today’s workout felt like a cross between plyometrics and yoga, it had more to do with stretching and posing than exerting force, but with more movement. I have pretty muscular legs from the daily running that I mentioned, but Dylan complained of soreness after, so this one is evidently tougher on beginners. Dylan and I, after showers, are headed out to dance the night away.

As with plyometrics, I don’t know what exactly kenpo is, but more importantly, I woke up on the floor next to a drum kit today. So I got my roommate, got my car, got a hot apple cider and drove back home. We stopped at my favourite eatery, got some breakfast in us (Eggs Benedict, obviously), and went home. I’m hoping “Kenpo” is something easy, maybe it works the same muscles as sitting down (read: none), that would be nice.

Nope. Turns out Kenpo is this kind of aerobic martial art, and when you add an ‘X’ to it, it turns into what can only be described as a karate lesson – if your teacher hated you, and never wanted you to win a fight, ever. It was hard, is the main point I’m making here, not so hard as to be off-putting, but my lower back is a little sore already, and Dylan is painfully aware of his glutes (those are his butt muscles) and it’s only been 45 minutes since we finished. Tonight my best friend in the world is in town to celebrate his birthday, so he’s going to come over and we are going to drink alcohol.

Today we have the option of just not working out or doing the X-stretch DVD, which at first glance looks like a low intensity exercise to loosen up the muscles and alleviate any soreness you may have acquired throughout the week. Dylan and I decided that we would try and do the stretch whenever we could find time. Unfortunately Dylan had work this morning, so I replaced exercise with napping.

Okay, week 1 is done, everybody made it out alive. I was a little worried because P90X has a reputation as this impossible workout that only the righteous few can hope to accomplish, but it’s really not that bad. It is certainly not an introductory workout, but for someone like me who already works out regularly and is looking for a challenge, I highly recommend it. I was actually surprised at how few of the exercises required free weights, or any equipment for that matter. A lot of the workout uses your own body as resistance, which is really great for people like me who can’t afford a gym membership and/or have insanely pale legs and don’t like to wear gym shorts in public. My muscles are a little sore, but the program does have daily warm up and cool down stretches to largely prevent soreness, and I’ve definitely felt worse from lesser workouts. So again, I’m pretty enthusiastic about this program. 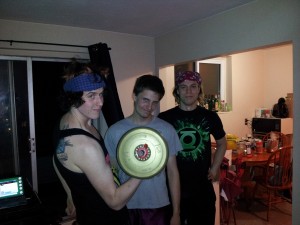