Let me start off by saying that I am not Jewish. I do not identify as any religion in particular, in fact, but if you forced me, I would say that around age five my family was asked to stop attending a Christian church because we weren’t donating enough money… so I guess I’m that. However, I recently became quite interested in religion when I started studying the ancient world and how history, politics, art, rhetoric, war and religion are so intertwined. Although I have been more investigative of Western religion, my husband has always been very keen towards Eastern religion and philosophy while my brother has consistently felt that his unique set of morals, beliefs and aspirations most closely coincide with the Jewish faith.

These interests, in combination with a certain series of events, namely, my husband’s new job and our limited living space making us unable to take time off around Christmas to see our families and unwilling to live in even more cramped conditions just so we can look at tacky lights and mismatched ornaments on a smelly, shedding plant that will never stop trying to scratch us while trying to explain to a rabbit that she isn’t supposed to want to climb trees; the job change also putting stress on our home economy and giving us the sudden realization that wow, we could actually qualify for a mortgage now if we save up a down payment making us low on frivolous spending money, effectively resulting in a fundamentally non-existent Christmas, led us to the idea of learning about a new culture through exploring their traditions in lieu of the ones we were more familiar with. We invited my brother for the weekend to celebrate with us.

I thought that I would learn about the history, customs and significance of Hanukah and how to cook (and eat) some traditional Jewish foods. What I did learn, on the other hand, was more about my own culture and traditions, family, marriage, adulthood and myself.

The first thing I learned was that family will impose during the holidays and no amount of love will change that. 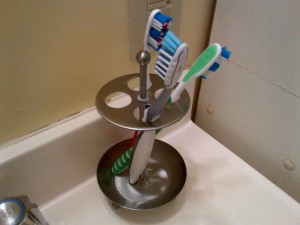 He had been here ten minutes and he had already added his toothbrush to our the holder.

The second thing I learned, while shopping at a grocery store different from the one I usually shop at because my husband got a gift card (to buy turkey with) from his new work, was that the holidays are ridiculously stressful, no matter which religion you subscribe to. In conjunction with this lesson, I also learned that my community is shockingly homogenous, and that being different in such a scenario is unsettlingly obvious – paying for ingredients for latka and sufganiyah (during Hanukkah, none-the-less) while my brother talked my ear off about gelt, where we would find a dradle and whether there were any synagogues in town may have set the record for weirdest time for a cashier to say “Merry Christmas”. Honestly, it made me feel very out-of-place, and then a little guilty about how I could possibly be being very offensive by trying to experience another culture by only being there for the good times of a festive celebration and not having to stick around for the bad times. I stared at the cashier in bewilderment while these thoughts raced through my head and she plopped my change into my bemittened hand. On to the grocery store where I became highly frustrated, borderline offended, after not being able to find any brisket despite the seemingly endless meat cases chock-full of every edible form of pig you could imagine (they were all on sale… even the feet). I became quite embarrassed and self conscious at this point but decided to ask the butcher about it anyway – he was no where to be found. In hindsight, I really should have gone to a proper butcher instead of a grocery store butcher. My husband dropped me at home, went out to our regular grocery store and picked up a lovely sirloin roast, completely un-kosher, but what was he going to do, he couldn’t find anything similar that was and he wasn’t really paying attention anyway. Which leads me to the next lesson I learned…

Part of being a woman is that any day where you have to prepare a big holiday meal for your family is going to suck all day long. Your husband, who said he would help, will mysteriously vanish part way through the day without getting in trouble. 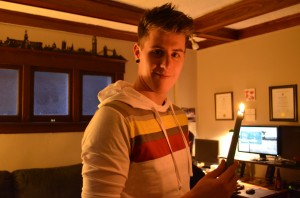 You can see him playing video games in the background of this picture.

Other relatives will offer to help, but abandon the task after realizing they have no idea what they are doing but decide to give you their opinion anyway. The relatives that do stick around to help are going to tell you about their problems the whole time. My brother somehow managed to fill both of these rolls for me, which was really efficient of him.

My brother and I learned these next lessons together. Firstly, that homemade gifts are awesome! 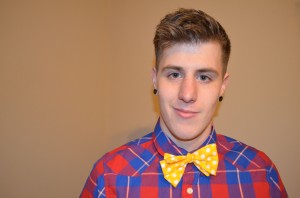 I made my brother a bow tie.

And secondly, because this isn’t the first time we’ve done homemade gifts for each other, that when we really appreciate the opportunity and don’t just see it as a regrettable extra burden in the middle of trying to buy gifts for everyone else on the list, we can turn out some pretty neat ideas. 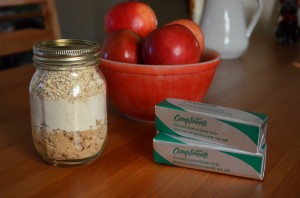 He gave me ingredients… 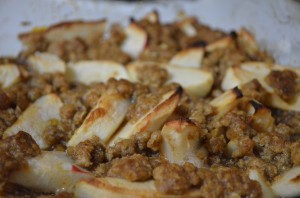 … and made me an apple crisp.

The next thing I learned is that lighting a homemade menorah will set off the fire alarm. Also a Hanukkah menorah is really hard to find in a small town. 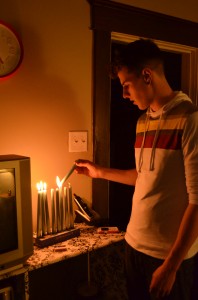 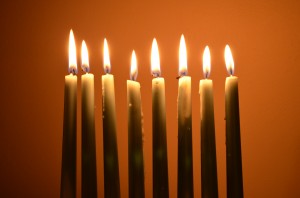 My brother assures me that this is “correct enough”.

Next lesson, latkes are delicious! 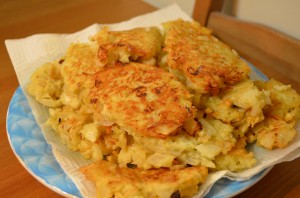 And are fun served as their own course with sour cream, apple sauce and strawberry jam. 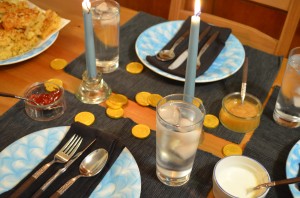 Lesson ten, the more adorable an idea sounds in my head, the harder it will be to make under stress. 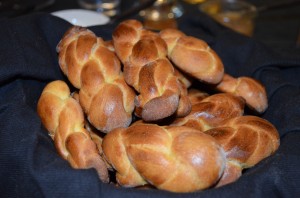 I then learned lessons two and four again; as an adult, the holidays, and preparing a holiday meal, are stressful, no matter which religion the traditions belong to. Also, after working all day to prepare a rich meal, you will be too tired to make little doughnuts, and your family won’t mind.

But I have to say, the most important lesson learned from this experience is that in any religion, at any celebration, family is the most import thing. We all noticed how familiar and “right” this night felt to us. After all, it wasn’t that different from how we normally celebrate the season – getting together, enjoying each other’s company and laughing all night.