My earliest memory of feeling self-conscious took place when I was about six years old and being picked up from school by my father. It must have been a Friday because he was also picking up my cousin of the same age and our friend. As we buckled up our seat-belts in the backseat of the hot car I noticed something, even though the three of us were pretty close in height and weight, my thighs looked bigger than theirs. This was the beginning of a life-long insecurity about my thighs, reinforced every time I would watch my mother getting ready for a night out and listen to her complaining about the very same part of her body. Throughout my life, I have worked hard to maintain a healthy body, but all of the discipline and determination in the world couldn’t make up for the fact that I have neglected to obtain a healthy body image. The time for change is long overdue.

The images that bombard us every day tell us that more than 90 percent of the women in our culture don’t have the right look – but who makes these decisions? You can blame it on the media, but when was the last time that blaming an intangible concept got you anywhere? It’s like blaming gravity for your inability to fly; doing so won’t make you anymore aerodynamic. We are the ones who buy the magazines and buy into the idea that men want their women to look like little boys.

If men didn’t like curves, Norma Jeane would never have become Marilyn Monroe, the cage crinoline wouldn’t have been so popular and the human race simply wouldn’t have survived. A woman’s curvaciousness has always been directly proportional to her fertility. When a girl enters her reproductive years and develops her curves, men start to notice her. Whether they know it or not, men are aware on some level that finding a mate with round hips, a small waist and full breasts means that not only will they be able to conceive his child but they will also be healthy enough to survive the pregnancy and provide nourishment to the child once it is born. If they favoured the emaciated frame synonymous with infertility, they would have been unable to reproduce and we would have mated our way into extinction. 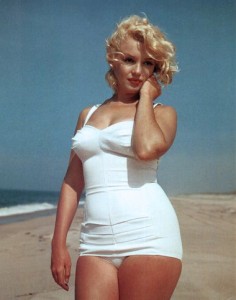 Just try to find a man who doesn't appreciate this picture

I say the time has come to embrace our womanly curves and their power over the men-folk. Read any book written pre-Twiggy that was considered the least bit deviant in it’s time and you’ll find pages dedicated to nothing but descriptions of a female character’s “creamy thighs.” The words, “creamy thighs,” alone were used so frequently in the 1950’s that they still resonate today. They even give the old “cellar door” word combination a run for it’s money in the most beautiful words in the English language contest. They are what make us women, setting us apart from men and girls.

I’m tired of shamefully hiding my thighs, scrutinizing them when I look in the mirror and fearing they may be perceived as being too big by others – especially when they are considerably smaller than Marilyn’s. When did a positive feature become such a negative trait? I think it’s time to bring back the thighs, covering them up because they are such a potent part of our sexuality, not because they make us feel embarrassed, inadequate or insecure.