Today, bridesmaids are no longer actual servants or ladies-in-waiting to the bride, yet many of the traditions we observe today are holdovers from these bygone days. These customs have become less strict with every passing generation, now they function best as a guide for choosing your bridesmaids which you can opt in and out of at any level of formality.

Back in the days when every woman needed a man – lest she die an old maid and bring shame to her family – the groom could not choose a relation of his bride to be his best man because the best man was expected to take care of the bride if the groom did not make it to the ceremony. In shotgun type situations, this could include a promotion to groom. Women have not had such rigid and terrifying rules when it comes to choosing their bridesmaids and with the decline in brides who have young women working in the family home, many are happy to have sisters and future sisters-in-law fill these respected roles.

"The Empress Eugenie Surrounded by her Ladies in Waiting"

In the time of crowns and corsets, a woman of nobility would have maidens helping her with daily tasks; these girls were sent to her by their families as a sort of finishing school with the ultimate goal of them finding a husband. The more distinguished unmarried girls who served under a royal woman were called Maids of Honour, independent of any impending wedding.  These days, a bride will choose friends and family members to help her with the tasks associated with planning and preparing for her wedding day, with the Maid of Honour having the distinction and privilege of offering the most help.

Princess Grace with her Bridesmaids

Many women instinctively know that they are not to choose a married woman to be a bridesmaid, this dates back to the days when “maid” meant a young girl more widely than it meant someone who cleans up after you. This practice, however, has become so unnecessary in modern society they we have a name for a Maid of Honour who is a married woman: matron of honour.

Subversively, once upon a time, at court, a girl could not become a lady-in-waiting until she had reached sixteen. This is why, when a woman chooses to have a bridesmaid younger than sixteen, she is called a junior bridesmaid. Though today there are no rules, there are still official titles. 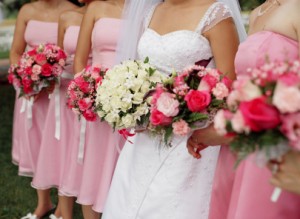 The modern Maid of Honour is naturally a woman the bride trusts, adores and respects. Officially, she will serve as a witness of the ceremony to make the union legal.  Her most important task is to stand up for the bride; to represent the bride’s old life and to give her confidence in her new life.